Verify that Next Actions Exist

After the release of OmniFocus 2 for Mac I took a couple of days off to stretch a holiday weekend into a five day mini-vacation. Since that’s too long to go without coding, I polished up my Verify Next Actions Exist script for the updated Mac app.

This script scans all projects and action groups in the front most OmniFocus document and lets you know if any are missing a next action. I use it in my morning review to keep all my projects moving forward.

Custom perspectives in OmniFocus 2 Pro already let you create a “stalled projects” perspective. As shown in the image, you just set the perspective to Use project hierarchy and set the projects filter to Stalled. 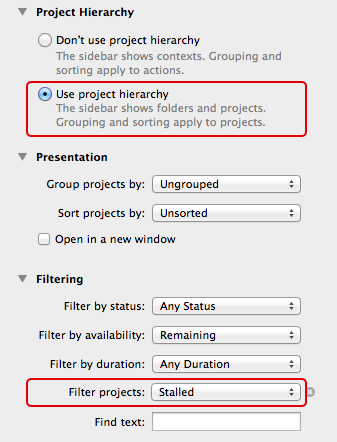 So why this script? The script’s results differ from a stalled projects perspective in two ways:

What Does It Do?

In some cases, the project will actually be complete. There’s no next action because all the actions are done! In that case, you can just mark the item complete. Other times you’ll need to decide what’s next to move the project ahead.

Once you’ve check things off or added any necessary actions, just run the script again to clean up. The script will remove the “(missing next action)” suffix from any items that no longer need it. (If you need to get on with getting things done, you can leave the suffixes around to clean up later. Anytime you run the script it will clean up any leftovers.)

To install the script, in OmniFocus 2 for Mac, choose Help → Open Scripts Folder. Drag the Verify Next Actions Exist file into the scripts folder. You can then use Customize Toolbar to add the script to the toolbar in OmniFocus.

(And drop me a note @curtclifton on Twitter to let me know which script you’d like me to update next.)

For the curious, there are a number of changes in this version of the script since the last release (version 0.5.2). Besides getting an update for OmniFocus 2 for Mac, this version:

Previous versions of the script came with a couple of extra scripts for clearing the “(missing next action)” markers from items. Now you can just run the script again after you mark items complete (or add more actions to them). The script will clean up after itself.